A Monarchy That Can Withstand the Test of Modernity 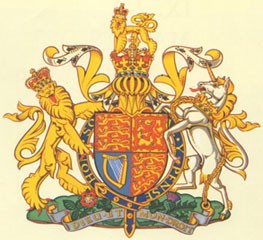 The tempestuous twists and turns of the lives of the present occupants of Buckingham Palace regularly put the press to good use, in England as in the rest of the Western world.

But make no mistake, they have little weight in the light of the past. The Windsor family, whose name goes back a century, is the heir of a millennial dynastic history that has known and overcome problems far more serious than those faced by the children of Queen Elizabeth II.

Fabienne Manière
God Save the Queen!

For the majority of the British, the monarchy remains a central institution, albeit symbolic. Its importance for national cohesion, at the time of multiculturalism, is greater than ever.

It is easier for citizens, regardless of ethnic or religious origins, to accept fidelity to the crown and the sovereign to accept the reference to a 'national identity' and 'republican values', the essence of which many would be hard-pressed to define.

A Norman and then Anglo-Norman monarchy, the dynasty was anglicized in the fourteenth century, at the end of the Middle Ages, without the various family branches of William the Conqueror ceasing to fight.

After the bloody disputes between Henry II Plantagenet and his children in the twelfth century, the last Plantagenet abdicated in 1399 and the House of Lancaster came to power.

In the following century, the War of the Roses saw the advent of the Tudors. After quite a few religious shake-ups linked to the sexual whims of Henry VIII, the latter peacefully left the trhone to the Stuarts upon the death of Elizabeth I in 1603. These Scottish Kings faced the only revolution England ever saw. After a brief republican interlude under the aegis of Cromwell, the Stuarts returned to power, but only for a short time.

Unwilling to share power with the representatives of the Commons, they were expelled in favor of a younger branch of the Stuarts who willingly accepted a parliamentary system, the embryo of modern democracy. The dynasty's last representative was Queen Anne Stuart.

Upon her death in 1714, for want of a child to succeed her, she left the crown to a distant German cousin, the Elector of Hanover, who became King of Great Britain under the name George I. He and his successors, uncomfortable in their new clothes and unable to speak English, relied on Parliament to govern the country.

According to a ritual which would become well-established, the King called to the head of the government the person chosen by the parliamentary majority. He received each new Prime Minister for a private interview. He could also re-invite him from week to week for informal and courteous exchanges on the affairs of the kingdom and the necessary signatures.

The Hanover dynasty was affected by the mental illness of King George III. In 1811, the King was forced to yield the throne to his son, the Prince of Wales. This regency ended in a painful degradation of the monarchy. George IV, King from 1820 to 1830, and his brother William IV, King from 1830 to 1837, were so debauched and incompetent that they left doubts about the survival of the monarchy.

Everything changed with the accession of eighteen-year-old Queen Victoria, the previous King's niece. 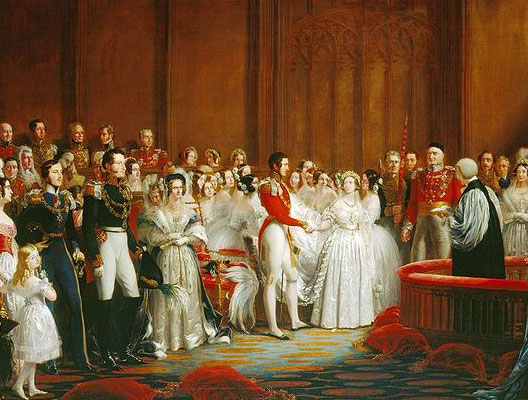 Married for love to a German cousin, Albert of Saxe-Coburg and Gotha, the young sovereign bent her natural vivacity to the strict Lutheran principles of her husband. Thus the royal family gave the British middle classes an example of the moral rigor that would be called 'Victorian.' Note that the high aristocracy maintained the epicurism inherited from 'Merry England' of the previous century in the secrecy of salons.

England reached its peak during Victoria's long reign, to the point of dominating the world economy and placing a quarter of the world population under the authority of the crown. In 1876, the Queen added to her titles that of Empress of India.

Upon her death in 1901, her son, the popular Prince of Wales, already sixty years old, ascended the throne under the name Edward VII. With him came a bit of the joie de vivre of yesteryear, although altered by the first signs of decline of British power. 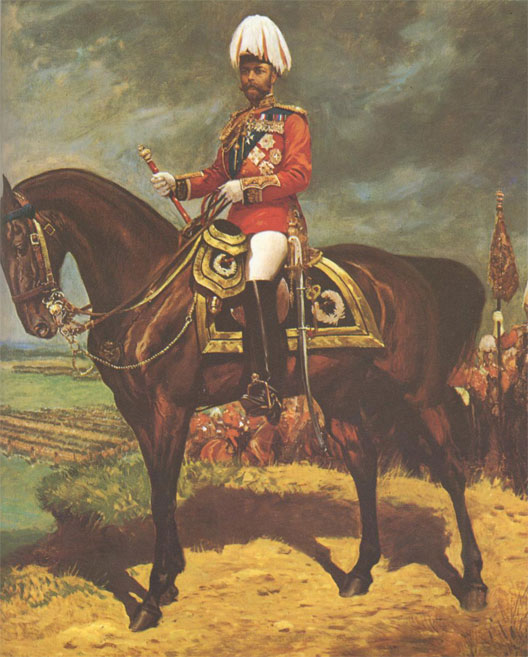 From the Hanovers to the Windsors

This decline became evident during the reign of the next King, George V, with the outbreak of World War I. It was during this war, in 1917, that the monarch exchanged his family name – Hanover – for Windsor, the more British name of his favorite residence.

The King conscientiously assumed his symbolic role. During World War I, he multiplied his visits to armies and hospitals, made donations, and constrained himself to the rules of rationing like all citizens.

His succession, in 1936, occurred in a tense international context. Italy, which invaded Ethiopia, was threatened with international sanctions and, in order to face them, was moving towards a threatening alliance with Nazi Germany. The heir to the British throne was a flamboyant bachelor, involved a scandalous woman, Mrs. Wallis Simpson, who was the mistress of Mussolini's son-in-law and remained close to Nazi circles. Becoming King under the name Edward VIII, he was promptly pushed to abdication by Prime Minister Stanley Baldwin.

The crisis unfolded with the coronation of his brother under the name George VI. he new sovereign, though shy and stuttering, would play his role with honor during the worst hours of World War II. Overworked, he died prematurely at 57 years old in 1952 and left the throne to his 24-year-old daughter, the current Queen Elizabeth II. The latter is about to break the record for longevity set by her grandmother Victoria, who ruled 64 years.

During her reign, the family has experienced difficult moments with the rift between Princes Charles and Andrew and the death of Princess Diana, but also a resurgence of popularity with the marriage of her grandson William to Kate Middleton, as well as the birth of their first child on July 22, 2013.

For the British monarchy as well as for its counterparts in continental Europe, the main challenge ahead is not so much the emotional sagas (divorces, adulteries . . .), which have always existed, as it is aging, which has been positively affected by the general increase in life expectancy.

In the future, we may see grandfathers succeeding great-grandmothers, which would do little to please the crowd. . . . Unless the Windsors follow the example of Benedict XVI, Queen Beatrix of the Netherlands, or Albert II of Belgium by retiring before their forces waned.