At the end of the Middle Ages, Western Christianity was besieged by the Turks but, strong and self-assured, dreamt of new horizons.
While the Portuguese labored to circumvent Africa in order to reach the Indian Ocean and Asia, a Genoese navigator conceived the insane project of reaching Asia in one go via the Atlantic Ocean.
Marie Desclaux 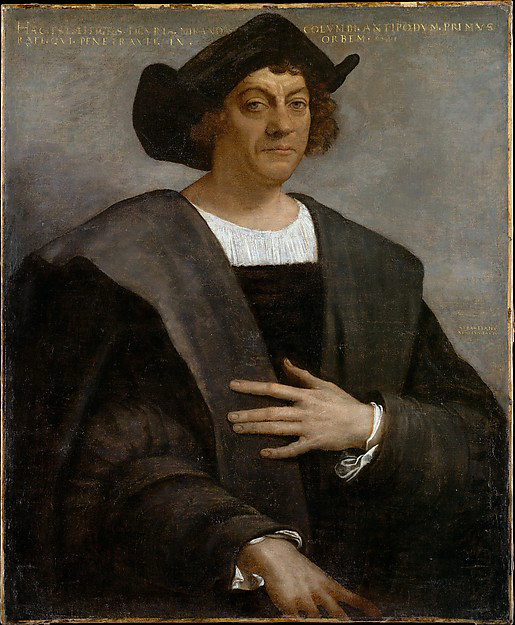 Born in 1451 in Genoa, Christopher Columbus was one of six children born to the wool weaver Domenico Colombo and his wife Susanna Fontanorossa.

The young man dreamt of adventure and had no interest in the family wool trade. He went to sea at the age of fifteen.
In 1476, when his ship was attacked by pirates and sunk off the coast of Portugal, he swam to the coast.
He joined his younger brother Bartolomeo, who owned a mapping shop in Lisbon, and settled in the country. Portuguese by adoption, he married Felipa Perestrello, daughter of the governor of Porto Santo, an island near Madeira. On this island their only son, Diego, was born.
Jewish? Corsican? Portuguese?
Christopher Columbus’s youth is known only through very tenuous testimonies. Even today, many researchers use these as grounds to construct more or less far-fetched theories about his birthplace and origins.
In 1952, the scholar and diplomat Salvador de Maradiaga dedicated a thick biography to demonstrating that Christopher Columbus came from a family of Portuguese Jews settled in Genoa. Augusto de Mascarenhas Barreto, also Portuguese, published an equally large biography in 1988 to ‘demonstrate’ that Columbus was actually born in Alentejo, in the south of Portugal! . . . Finally, the Corsican city of Calvi brought forth one of its houses inherited from the Genoese domination as the navigator’s true home.
Why wait to prove that the illustrious navigator was the natural son of the merchant Jacques Coeur from Bourges and/or that he fathered the explorer Jacques Cartier?

Christopher Columbus received a great number of maps and documents from his father-in-law, a marine explorer. . . . He made good use of them and also read books such as, naturally, Marco Polo's Book of Wonders and the Imago Mundi, a famous geographical work by Cardinal Pierre d'Ailly.

An Insane Project
Based on his readings, Christopher Columbus planned to reach Asia by sailing westward.
A competent but overly imaginative navigator, he believed that it would take only a fortnight of sailing to reach China, which was then called ‘Cathay,’ which came from the Canary Islands. ‘Between the end of the East and the end of the West, there is only a small sea,’ he assured those who would hear it.
His project seemed crazy to most of the experts of his time. The latter knew, of course, that the Earth was round, and, thanks to Eratosthenes, they even knew its radius. They were convinced that the sailors would die of exhaustion before reaching their goal.
They were right, for, in the absence of a New World, it would have been entirely impossible for any ship of the time to cross the Atlantic and Pacific Oceans together in one go. But neither they nor Christopher Columbus could know that he would find a New World on his way: the American continent.
His error should have earned the young man from Genoa an anonymous demise, at best, or, at worst, a tragic death in the middle of the ocean. Against all odds and thanks to this error, he would change the face of the planet!
An Enthusiastic Queen
Christopher Columbus, obstinate, skillful, and convincing, rallied the royalty of Spain to his idea.
The latter, Ferdinand of Aragon and Isabella of Castile, had just conquered Grenada, ending eight centuries of Muslim presence on the peninsula. They were now looking to the open sea and warmly welcomed the project presented to them by Christopher Columbus.
The queen, in particular, was enthusiastic. By the Capitulations of Santa Fe, she granted him the very prestigious title of Admiral, usually reserved for a member of the royal family. The title concerned all lands and islands to be discovered, giving the navigator the right to exercize justice and collect taxes there in the name of the Kings.
With this royal support, the navigator could finally mount his expedition. Nothing very significant: three modest carracks or caravels (which bore the names of Sevillian prostitutes!) and about one hundred sailors.
The unexpected discovery of a New World and a revolution in history soon followed; for the first time, all human societies were brought into contact.
Christopher Columbus died in Seville at the age of 55, rich but lonely, convinced to the very end of having reached Asia rather than having discovered a New World.
Publié ou mis à jour le : 2018-11-27 10:50:14